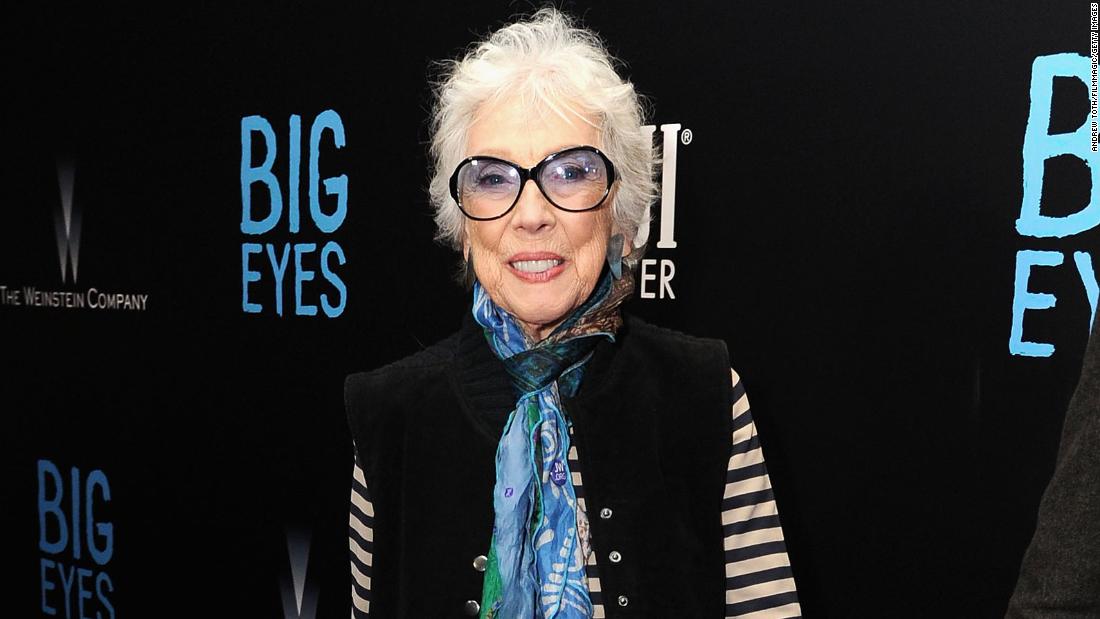 Artist Margaret Keane, known for her distinctive paintings of wide-eyed figures, has died aged 94.
Keane, whose husband infamously took credit for her work before losing a high-profile legal battle — a story immortalized in director Tim Burton’s film about her life, “Big Eyes” — passed away on Sunday at her home in Napa, California. Her death was confirmed to CNN by Robert Brown, executive director of her gallery, Keane Eyes.

Born in Nashville, Tennessee in 1927, Keane enrolled in art classes at the age of 10. After attending the Traphagen School of Fashion, an art and design school in New York City, she developed her signature style — melancholic renderings of cartoonish women, children and animals, often referred to as big-eyed “waifs.”

“I was painting my own inner feelings,” she told the New York Times in 1992. “I was very sad and very confused about why there was so much sadness in the world and why God permitted wickedness.”

In 1955, she married real estate agent Walter Keane, who offered to sell her paintings while surreptitiously passing them off as his own. It was only upon accompanying him to the San Francisco nightclub The Hungry i, where he often peddled her work, that she discovered the deception.

“He had me sitting in a corner,” Keane recalled to the Guardian in 2014, “and he was over there, talking, selling paintings, when somebody walked over to me and said: ‘Do you paint too?’ And I suddenly thought — just horrible shock — ‘Is he taking credit for my paintings?'”

Keane ultimately agreed to continue the arrangement, and her husband enjoyed significant commercial success. The paintings sold widely in the 1960s — not only as canvases and prints, but on plates, postcards and mugs.

The works divided the art world. But while some critics dismissed them as cliché and overly kitsch, they were also praised by the likes of Andy Warhol. “I think what Keane has done is terrific,” the Pop artist once told Life magazine, in a quote that opened Burton’s movie. “If it were bad, so many people wouldn’t like it.”

After divorcing Walter in 1965, Keane moved from California to Hawaii and began publicly taking credit for her work. When her former husband rejected the claim, she famously arranged a “paint-off” in San Francisco’s Union Square, though he declined the challenge.

In 1986, he was again asked to prove he could recreate the paintings’ distinctive style — this time in front of a jury. Keane had sued him (and USA Today) for libel in a Honolulu court, after he continued to claim credit. The judge challenged both Keane and her ex-husband to paint a large-eyed child, though the latter declined, citing a shoulder injury. She completed a painting for the court in under an hour.

The jury was convinced, and Keane was awarded $4 million, though that sum was later overturned. She never received any compensation. “I didn’t care about the money,” she later said, according to “Citizen Keane”, a book about the scandal. “I just wanted to establish the fact that I did the paintings.”

Keane’s work enjoyed renewed interest with the 2014 release of Burton’s “Big Eyes,” in which the artist was played by Amy Adams. On Wednesday, the movie’s co-writer, Larry Karaszewski, paid tribute to Keane on Twitter, saying that he was “grateful” to have spent “so much time getting to know her beautiful spirit.”

“It took a decade to bring ‘Big Eyes’ to the screen,” he wrote, adding: “She wanted the world to know the truth about her life and art.”

According to her gallery, Keane continued painting almost daily into her nineties. She is survived by a daughter and five step-children (from separate marriages), as well eight step-grandchildren, according to a statement posted to Instagram by the gallery on Wednesday.

“We will miss her love, creative ingenius (sic) and passion to continue to create new works up until her passing,” the statement read.