At least six armed robberies, including two that turned deadly, have been reported at at different 7-Eleven locations across Southern California. The crimes happened in the cities of Brea, Ontario, La Habra, Santa Ana, Upland and Riverside, and authorities said at least three of the crimes are related.

BREA, Calif. – A string of armed robberies at several 7-Eleven locations throughout Southern California early Monday morning left at least two people dead – and police said preliminary evidence indicates at least three of the crimes are linked to each other.

A surveillance photo of the suspect wanted in connection with the incidents at the Brea, La Habra, and Santa Ana 7-Eleven locations has since been released as detectives continue to investigate.

Authorities said they will be alerting other 7-Eleven stores to take additional safety precautions.

Suspect wanted in the fatal shooting of an employee at the 7-Eleven on Lambert Rd and N. Brea Blvd in Brea. Police believe this suspect is also responsible for the shootings in La Habra and Santa Ana. (Credit: Brea Police Dept.) (FOX 11)

Related:  Why did Ohio officers handcuff Jayland Walker after shooting him dozens of times?

The shootings coincide with National 7/11 Day, where customers can receive a free Slurpee.

“Our hearts are with the victims and their loved ones. We are gathering information on this terrible tragedy and working with local law enforcement,” 7-Eleven said in a statement. 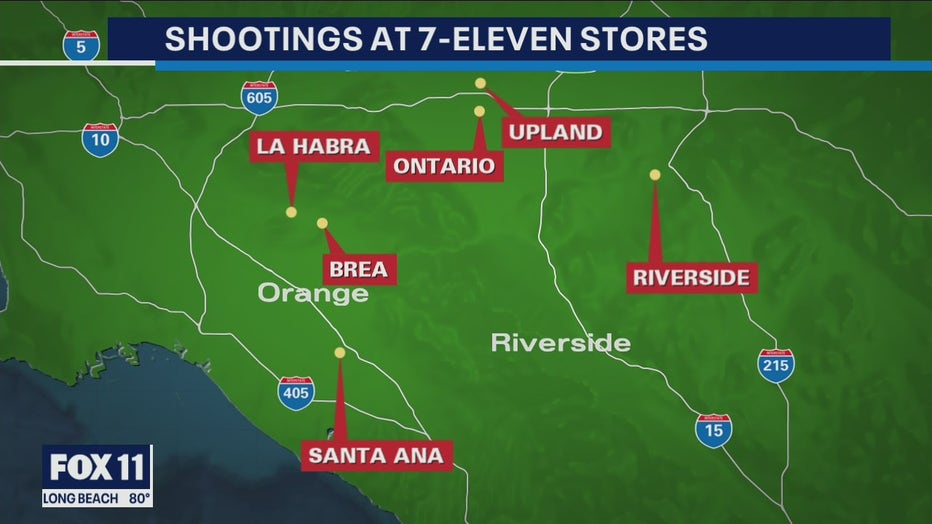 Here’s what we know so far about the six separate incidents.

The Ontario Police Department confirmed to FOX 11 that another robbery was reported at a 7-Eleven location at 636 N. Vine Ave. in Ontario. FOX 11 is working to confirm more details about what happened and whether this incident is related to the others.

Police have also confirmed a robbery at a 7-Eleven in Upland at 2410 W. Arrow Route early Monday morning. According to Upland Police Sergeant Jacob Kirk, the suspect entered the store around 12:40 a.m. Monday, pulling out a weapon. The suspect made off with about $500 and some drinks. No one was injured in this robbery, and Upland PD is working with other law enforcement agencies to determine if this suspect is the one responsible for other shootings throughout the night.

Police believe this fatal armed robbery is linked to a similar incident that happened about an hour later in La Habra.

In Brea, a store clerk was fatally shot during an armed robbery at the 7-Eleven on Lambert Road and N. Brea Boulevard around 4:18 a.m., police said. The male victim died at the scene.

According to authorities, they believe based on preliminary evidence that the suspect involved in this fatal shooting is linked to the incidents at the La Habra and Santa Ana 7-Eleven stores.

Shooting at 7-Eleven in Santa Ana

A man was found dead in the parking lot, suffering from a fatal gunshot wound to his upper torso, police said.

A similar crime was reported around 3:23 a.m. at the 7-Eleven in the 300 block of 17th Street in Santa Ana, police said. A man was found dead in the parking lot, suffering from a fatal gunshot wound to his upper torso.

Officials confirm this suspect is also wanted in connection with the incidents at the La Habra and Brea 7-Eleven locations.

Clerks told FOX 11 that the suspect connected to the three incidents had visited the Santa Ana location the previous day and was not allowed inside.

Police have identified the man killed in the parking lot as 24-year-old Matthew Rule. 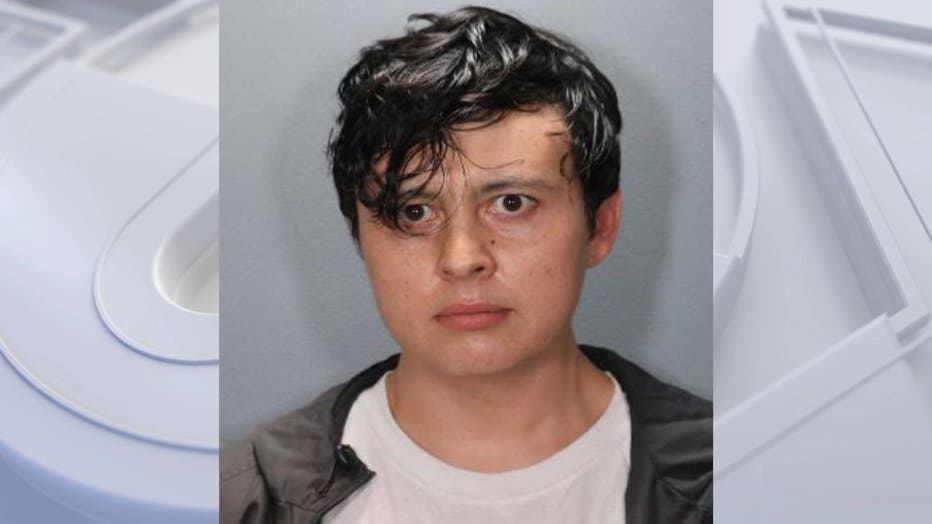 Shooting at 7-Eleven in La Habra

Meanwhile in La Habra, police were investigating a similar armed robbery after two people were shot outside the 7-Eleven near Cypress Street and Whittier Boulevard around 4:55 a.m.

In this incident, an employee and a man sitting in his car outside the store were shot; both were taken to the hospital and are expected to survive, officials said. Police told FOX 11 a cash register was found apparently on the floor of the convenience store.

The two victims were identified as a longtime, well-liked clerk at the 7-Eleven as well as a customer. Both are expected to survive, police said.

A string of armed robberies at several 7-Eleven locations throughout Southern California early Monday morning left at least two people dead – and police are investigating if at least two of the crimes are possibly linked to each other.

Authorities said preliminary investigation indicates this suspect is the same one wanted in connection with the incidents at the 7-Eleven stores in Brea and Santa Ana.

As this is an ongoing investigation, police are asking witnesses to contact La Habra Police Department’s Watch Commander at 562-383-4300.

1 shot after robbery at 7-Eleven in Riverside

The suspect fled the scene before officers arrived on scene.

Just before 2 a.m., an armed robbery was reported at a 7-Eleven on La Sierra Avenue in Riverside.

According to police, a customer was shot in the head inside the convenience store and remains in grave condition. There is no indication the customer did anything to intervene in the robbery but was still shot by the suspect, police said.

The victim remains in critical/grave condition

Officials did not immediately release information on a possible suspect or suspects.

DeSantis Suspends Tampa Prosecutor Who Vowed Not to Criminalize Abortion

CDC expected to ease Covid-19 recommendations, including for schools, as soon as this week

Suspects sought after 4 shot on West North Avenue in Baltimore